I have a 3 year old daughter named Jessica. Some of you may have even met her.

I spend decades... honing my craft, blood sweat and tears, through hell and high water, and she waltzes straight into this prestigious magazine with a photo she took weeks before her third birthday! Seriously, the injustice of it all...

Granted, I’d set up the shot and was holding the camera, but she pressed the shutter!...And perhaps her superb portrait of her dad was only there to accompany a four-page article all about my adventures with Bounders...but that’s beside the point! My daughter has a byline in Professional Photo Magazine, and nobody can ever take that away from her.

(see her byline below…)

The article in question focuses on my journey into photographing dogs, the unique methods used and unusual technique. At first glance this may appear like just another magazine article. After all, there’s nothing overly new about Bounders being featured in magazines, but to me this one is very special.

This was not a dog-based magazine. They did not simply accept my submissions because I provided some cute pics of dogs to fill up the back pages of their monthly publication. No, the editor and publisher of the magazine, a reputable photographer in his own right, came across my work and approached me for an interview. I was chosen solely on the strength and uniqueness of my work.

Personally, this article is as valuable (if not more so) than any photography competition or award I may have entered. I wasn’t seeking this accolade. I was just doing what I love, playing around with dogs, and it found me. That means a lot…

I remember as a fledgling student, reading in amazement similar magazine articles featuring outstanding photographers, discussing their work and careers.

I recall marveling at one photographer in particular, trying to work out how on earth they had made their images look so cool and different. His work jumped out at me off the page.

I really wanted mine to stand out in the same way, and I wondered how great it might be to one day become that good. An outstanding professional, acknowledged by my peers.

And now...15 or so years later as I flick through the pages, it dawns on me, I am that photographer.

On the one hand, it’s just a magazine article about photographic technique. On the other, it represents so much about what I’ve become, and the way in which I’ve achieved it.

Over the years, I’ve rarely chosen the easy way, or followed the trend, and there isn’t much about how we do things at Bounders that can be considered the norm. I’ve also never been very comfortable around other photographers, and felt like a bit of an outsider. I probably wasn’t viewed like this at all, but it can be quite a lonely experience when you don’t follow the herd.

So to have this article acknowledge and admire not just the unusual methods and techniques I’ve created, but the way in which we operate and market the business of Bounders, has been really comforting.

There aren’t many feelings better than being recognised by your peers, especially in the flooded marketplace of photography. It’s all been a truly humbling experience, but not as humbling as my daughter’s first ever byline.

Kids, eh? They always know how to bring you crashing back to Earth...

If you'd like to read the full article - it is called 'Best of Friends' written by Terry Hope.

Interested in your own Bounders Experience for you and your dog?

Find out more at www.bounders.co.uk 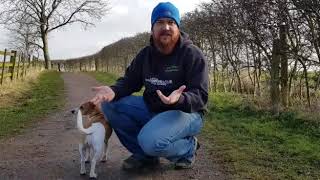 5 Top Tips for Taking Better Pics of Your Dog

Why You Shouldn't Put it Off Until Later...

IS YOUR DOG READY TO BATTLE?!?

WOULD YOU HAVE TAKEN THE RISK?

5 Top Tips for Taking Better Pics of Your Dog

Why You Shouldn't Put it Off Until Later...

How to Beat the Winter Blues...